Looking Back on Our First 30 Years

The Law Society recently celebrated its 30th anniversary. In connection with that milestone, a short documentary was published. Additionally, there was an article in the Clark Memorandum, which shared some of our rich history.

The Law Society has hosted Annual Conferences across the United States over the years, from Seattle to San Diego, D.C. to Philadelphia, Kansas City to Dallas, and beyond. Planning for Annual Conferences is led by local chapter leaders in the area where the conference is hosted that year.

You can access past programs and materials from recent Annual Conferences here.

Spanish and Portuguese subtitles are available under YouTube settings.

Joshua Reuben Clark was born on September 1, 1871, in the small farming town of Grantsville, a Mormon settlement thirty-five miles southwest of Salt Lake City. Although he did not begin his formal education until he was ten years old, young Reuben had been tutored at home by his mother and had developed a love for learning that lasted his entire life.

He had not been able to attend high school, but by 1898, after four years at the University of Utah, Reuben completed all the requirements for both his high school diploma and his bachelor of science degree. He graduated first in his class—in addition to having served as student-body president, managing editor of the student newspaper, and secretary to Dr. James E. Talmage, who was president of the university. 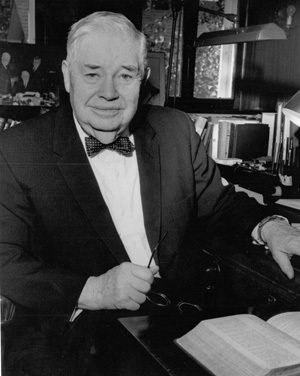 On September 14, 1898, J. Reuben Clark married Luacine Annetta Savage in the Salt Lake Temple, with Dr. Talmage officiating at the ceremony. For the next four years he held various positions around the state as a teacher and administrator on both high school and college levels.

In 1903 the Clarks, including two small children (two more were to follow), moved to New York City, where Reuben entered law school at Columbia University. His first year’s work was of such high quality that he was among the three second-year students elected to the editorial board of the Columbia Law Review. By the end of his second year he was admitted to the New York Bar. He received an LL.B. degree in 1906.

Three months after graduating from law school, Reuben Clark was appointed assistant solicitor of the State Department by Elihu Root, secretary of state under President Theodore Roosevelt. Shortly thereafter he was also named an assistant professor of law at George Washington University , where he taught until 1908.

In July 1910, under the administration of President William Howard Taft, Mr. Clark was appointed solicitor of the State Department. As part of his responsibilities he represented the United States in a dispute with Chile. The king of England, serving as arbitrator, ruled in favor of the United States and granted one of the largest international awards up to that time—nearly a million dollars. Also during his solicitorship, Clark published his classic “Memorandum on the Right to Protect Citizens in Foreign Countries by Landing Forces.” Secretary of State Philander C. Knox declared of Mr. Clark: “I am doing him but justice in saying that for natural ability, integrity, loyalty, and industry, I have not in a long professional and public service met his superior and rarely his equal.”

During World War I, Mr. Clark received a commission as major in the Judge Advocate General’s Officers’ Reserve Corps. In this capacity he helped prepare the original Selective Service regulations. He was then assigned on active duty to the U.S. attorney general’s office where he prepared “emergency Legislation and War Powers of the President.” In recognition of his meritorious service, he was awarded the Distinguished Service Medal.

By President Coolidge’s appointment, Mr. Clark became the under secretary of state in 1928. During this service he published the “Clark Memorandum on the Monroe Doctrine,” praised by critics as a “monument of erudition” and a “Masterly treatise.” The Law Society’s semiannual publication takes its name from this famous work.

On October 3, 1930, J. Reuben Clark was named U.S. ambassador to Mexico. After his resignation two and a half years later, Mr. Clark’s diplomatic efforts were praised by President Herbert Hoover, who said, “Never have our relations been lifted to such a high point of confidence and cooperation.”

In 1933, at age sixty-two, Mr. Clark’s lifelong devotion to the Church culminated in a new calling—counselor to President Heber J. Grant of The Church of Jesus Christ of Latter-day Saints. As a member of the First Presidency, President Clark was a leading supporter of the Church welfare plan. He also helped put the finances of the Church on a budget plan. He was an inspirational leader and spoke forcefully on topics including freedom, his court, the inspired Constitutions, work, integrity, and chastity. An avid student of the life and teachings of the Lord Jesus Christ, he authored many scholarly books on gospel topics.

In addition to his Church duties, J. Reuben Clark continued to share his professional expertise as a member of corporate boards; government, political, and private committees; and academic journal and educational boards. He also bought and maintained a farm in Grantsville, his boyhood home.