Our regional Women in Law Conference was held on February 27, 2020 at the beautiful Sandra Day O’Connor Law School in Phoenix, Arizona. We had seasonably gorgeous weather, a respectable group of women attorneys/law students present, and a stellar program.

Judge Mary Schroder, the keynote speaker of our WIL Regional Conference, told of Eleanor Roosevelt who asked her husband for his list of candidates to fill the vacancy on the 6th Circuit federal bench. When she objected that it was devoid of any woman, President Roosevelt said if she could provide any names of suitable women, he would consider them. She produced a list of 500 qualified women from which he chose Florence Allen. Judge Allen became the first federal female judicial appointee in the nation.

Since then, there have been many women called to the federal bench. One such trailblazer is Judge Schroeder. 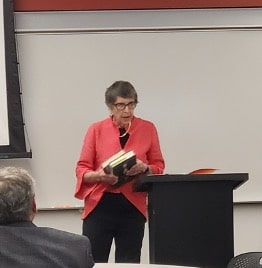 Schroeder’s path was atypical for women in her day. She had been one of only six women students in University of Chicago Law School, where she met her husband, Milton. Upon graduation in 1965, they moved to D.C. where Schroeder worked as a litigator for the Civil Division of the US Department of Justice – an unusual position for a women. But, when Milton was offered a faculty position at the Arizona State University School of Law, Schroeder left D.C. and with it, the ability to find a job. More conservative than D.C., Arizona had no major law firms with women attorneys. She applied to work for a labor union representing minors but was rejected because “Women couldn’t be tough enough.” However, with law school grades higher than her husband’s, she was able to get a clerkship with Justice Jesse Udall of the Arizona Supreme Court. To put this accomplishment into perspective, while working there one day, her husband came to take her to the penthouse for lunch. But, because women were not allowed to dine there, he brought her a sack lunch instead. Such gender discrimination was rampant in that day. Fortunately, Udall was impressed with Schroeder and told her, “Mary, you should be working downtown with the big boys.”

With his help, Schroeder secured a position with the law firm, Lewis & Roca (Lewis Roca Rothgerber Christie) the next year. She also had had the recommendation of an attorney in Udall’s firm who happened to understand how tough it was for female attorneys because he was married to one, Sandra Day O’Connor. Within two years, Schroeder had made partner at this major firm, which no woman had ever done in Arizona or in the Rocky Mountain West.

An Arizona local, it is Schroeder’s belief that women have made great progress over the last century beginning with women’s suffrage. She credited Utah Mormon pioneer women for helping women of Arizona in their struggle for voting rights. But, although she feels that the bars against women’s entry into the legal field are down, there are still barriers to female attorneys achieving major advancements. More must be done. This is important because, in her view, the role of women is not to womanize the courts but to humanize them. This should be everyone’s goal.

As prelude to Judge Schroeder, the first speaker, April Maxwell, spoke about how faith makes all of us not only better people but better attorneys. Her faith prompted her – out of the blue – to apply for law school. She had always believed her mission in life was to be a mother first and pursue education second. But, she felt prompted to do otherwise even with small children at home; they went through law school and “graduated” with her.

Following inspiration has been the hallmark of her legal career. Maxwell said when she trusts in God’s power, briefs write themselves, her ability to argue legal points increases, and people arrive when she needs them. She believes that there is power in following inspiration. Had she not followed the prompting to go to law school while raising small children, she would not have had the tremendous opportunities that she has had. Much of the inspiration she received was counter to what worldly wisdom dictated, but Maxwell would not have achieved what she has in her career had she chosen differently. It is her witness that women should not be afraid to jump when moved upon by the Holy Ghost, especially when the prompting is to help others or to do what is right. As long as one’s priorities are set on God first, success will come.

Having run her own bankruptcy firm, Maxwell has some practical wisdom for women seeking legal careers. First, it is not necessary to forge ahead alone in one’s career. She advises seeking mentorship from others. For instance, Maxwell did not know how to write a compelling brief until she sought help. It is difficult for women to do it all, no matter how capable they are. We should get advice from experts, then delegate tasks whenever we can. Second, success only came to her after she was willing to make a fool of herself. She has observed that women are especially risk-resistant and that unless they are willing to “work without a safety net, they are unable to fly.” She said once she has done a foolish thing, she owns it, asks for honest feedback, and moves on. In the meantime, she had to learn to set her ego aside. Third, women are sometimes reluctant to “run with the big boys.” She said that the best way to affect change and make a difference is to be willing to put oneself into the thick of the action where the decision makers are. In her experience, the Law Society is a good place to run.

As to how her children fared through her all of this, Maxwell vows they have benefited. They have learned that they can do anything, because things will work out.

Our second speakers were DeeAn Gillespie Strub and Kristina Reeves who are advocates for those threatened with termination of their parental rights by the state of Arizona. Arizona has the highest parental termination rate in the nation with a 99.5% rate in Maricopa County alone. This is shocking considering that for most other rights to be terminated, a strict scrutiny standard is applied. The current 30-year policy of parental termination has never been questioned on constitutionality grounds. Furthermore, until recently the Department of Child Services was not required to obtain a warrant to take children from their homes. Strub and Reeves are making headway in appealing these terminations by relying on a ten-year-old obscure law referred to as Parents’ Bill of Rights. Thankfully, since 2018 they have succeeded in requiring the DCS to obtain a warrant before removing children. In addition, Strub and Reeves have a case before the Arizona Supreme Court to mandate that the state should have to prove parental unfitness before they can terminate parental rights, something that has never been legally defined.

Thank you to Judge Mary Schroder, DeeAn Gillespie Strub and Kristina Reeves for their wonderful spirit and participation in one of the final events we got to gather for in person. These empowering women emphasized that women in the legal field play critical roles in fulfilling Heavenly Father’s plan for us as individuals, the Law Society and for all of us here on Earth. WIL is looking forward to continuing this dialogue at the Women in Law’s “Our Voices, Our Education, Our World” virtual recruiting and networking event on September 30. Click here to learn more.